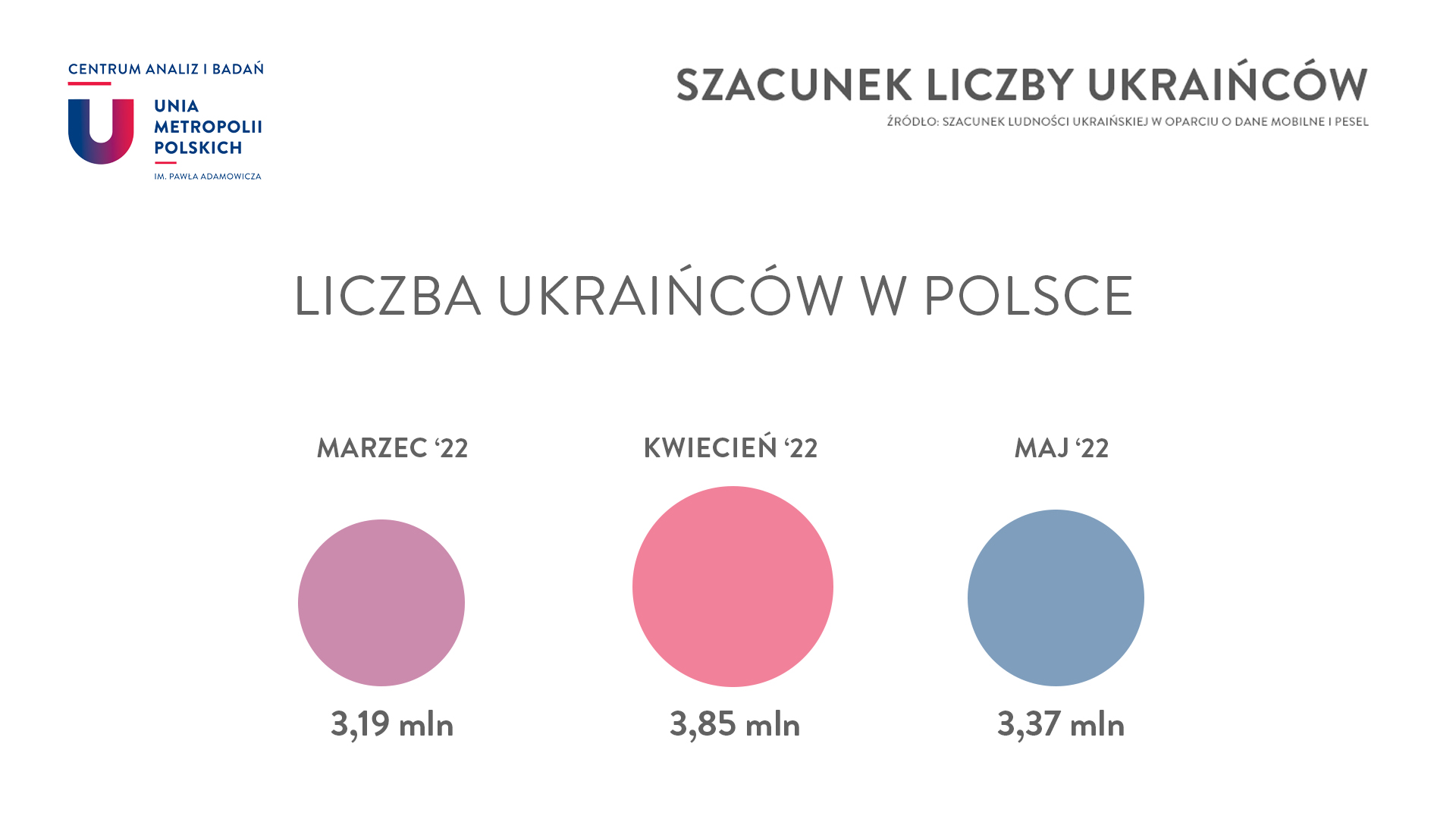 3.4 million Ukrainians in Poland. New report by the Union of Polish Metropolises

According to the latest report by the Pawel Adamowicz Centre for Analysis and Research of the Union of Polish Metropolises, the population of Poland including Ukrainians was 41.64 million in May this year and 42.11 million as recently as April. The results indicate that April was the month with the largest increase in the Ukrainian population in Poland - almost 4 million people. The analysis is a follow-up to the report 'Urban hospitality: great growth, challenges and opportunities', which was published at the end of April this year.

The UMP report shows that in May this year. Ukrainians accounted for 8 per cent of Poland's population. What else do we know? In April, there were 3.85 million Ukrainians in Poland. At the end of May, we estimated 3.37 million, with 1.43 million in the 12 largest Polish cities alone.  Of the Ukrainians staying in our country, seven out of ten lived in UMP metropolitan areas (69 per cent).

The report 'Urban hospitality: great growth, challenges and opportunities', which was published at the end of April this year, is the first document in Poland to provide estimates of the number of Ukrainians and Ukrainian women staying in Poland, as well as showing where they are staying. According to the report, the number of Ukrainians in Poland was almost 3.2 million in March. In April, it rose to 3.85 million, and in May it fell slightly to nearly 3.4 million. The Centre for Analysis and Research also focused on the population in the 12 largest Polish cities affiliated to the Union of Polish Metropolises and their metropolitan areas. The highest number of Ukrainians living in these metropolises so far was recorded in April this year. - 2.58 million. In the UMP cities, it was also the highest in April - 1.60 million.

The data developed in the report was collected by Selectivv thanks to the innovative Geotrapping® method, which, by aggregating information from mobile devices, made it possible to determine the number and location of Ukrainians and Ukrainian women (persons aged 15 and over) residing in Poland. This data was cross-referenced with information on PESEL numbers, which in turn made it possible to estimate the number of Ukrainian children living in Poland.

- What draws attention in the Selectivv data series is the constant share of Ukrainians residing in the area of the largest 12 Polish metropolises - 69 per cent. Thus, the role of the largest cities as the main destination areas for Ukrainian refugees does not diminish with the passing of months, says Agata Górny, Ph.D., from the Centre for Migration Research at the University of Warsaw.