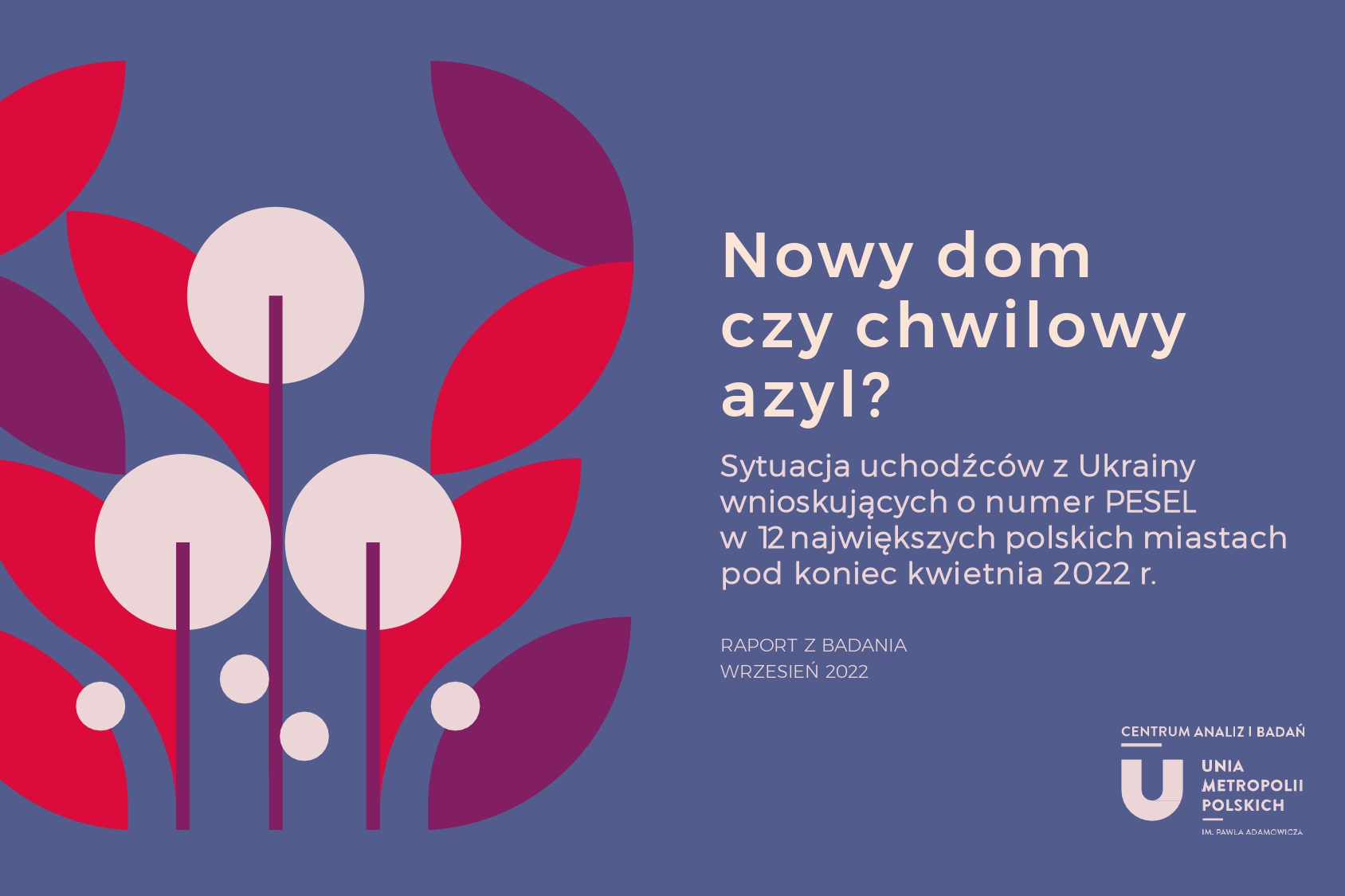 Report: A New Home or a Temporary Refuge?

Nearly 60 per cent of Ukrainian citizens applying for a PESEL number in cities affiliated to the Union of Polish Metropolises declared that they wanted to return to their country after the end of hostilities, while 22 per cent did not know if and when they would return - this is data from a report by the Paweł Adamowicz Centre for Analysis and Research of the Union of Polish Metropolises, 'NEW HOME OR A TEMPORARY REFUGE? The situation of refugees from Ukraine applying for a PESEL number in the 12 largest Polish cities at the end of April 2022'.

From mid-March 2022, Ukrainian citizens fleeing the war caused by Russia could apply for a PESEL number in Poland. The report, prepared by the Centre for Analysis and Research of the Union of Polish Metropolises, contains the results of a survey conducted among Ukrainian refugees at urban PESEL number assignment points in 12 UMP cities at the end of April 2022 on a sample of 3,635 people. The survey captures their characteristics, situation in Poland, nee ads, problems and future plans.

- The data obtained will help better prepare cities to welcome migrants, provide them with adequate support in their daily lives in their new local communities, and ensure access to the offer of urban public services. - explains Dr Marta Pachocka, one of the authors of the report. - Thus, the report on the "New home or temporary refuge?" study is another important research initiative, particularly significant because it uses a uniform methodology and research technique based on the same questionnaire, which makes it possible to compare the results for all 12 largest Polish cities.

The results of the survey show that in Poland's largest cities, it was mainly women (91 per cent), people who came to Poland with a minor child (47 per cent) and people with a university education (45 per cent) who applied for a PESEL number.

What else does the report show? 38 per cent of Ukrainian refugees applying for a PESEL number at the end of April, after arriving in Poland, moved in with Poles (with their hosts or in their flat alone). 23 per cent moved in with Ukrainian friends or family previously residing in Poland. It was the issue of finding accommodation that was the main problem raised by respondents during their stay in Poland - 28 percent indicated that they needed help with this.

The second most important was the need for help in finding a job (27 per cent). 54 per cent of refugees requesting a PESEL number at the end of April were looking for a job in Poland - 37 per cent for any job and 17 per cent for a job matching their education and qualifications.

The report also shows the issue of refugees' use of childcare and education. At the end of April, among Ukrainians applying for PESEL in the largest Polish cities, 67 per cent of respondents did not send their children to a crèche or kindergarten in Poland. Older children mainly used distance learning in Ukrainian schools - 38 per cent of primary school students and 39 per cent of secondary school students.

The results of this survey indicate great uncertainty and a sense of temporariness among Ukrainians. Russian aggression has led to a humanitarian crisis in Ukraine and forced displacement. Poland has become the main host country for migrants from Ukraine. The largest cities - where the refugees mainly headed - had to provide them with adequate support in a short period of time. The data obtained can better prepare cities to continue receiving migrants and providing them with adequate assistance.

Information about the survey:

The survey was conducted in the second half of April 2022 (21-29.04) by the agency DANAE sp. z o.o., commissioned by the Centre for Analysis and Research of the Union of Polish Metropolises. It was quantitative in nature using a paper survey. At designated points in 12 UMP cities, interviewers distributed a questionnaire in Ukrainian for respondents to fill in themselves. The completed questionnaires were then collected in a suitably marked urn.

The respondents were adult refugees from Ukraine who - in accordance with the Law of 12 March 2022 on assistance to citizens of Ukraine in connection with the armed conflict on the territory of the country (Journal of Laws 2022, item 583) - applied for a PESEL number and at the time of the survey were in/before the municipal points responsible for assigning it in 12 UMP cities (a minimum of one point in each city). A total of 3635 questionnaires were collected. The data was reweighted based on the structure of persons who obtained a PESEL no. in each city (number, gender, age), which allowed relating the results of the survey to the entire population of Ukrainian refugees who applied for its granting during the surveyed period.

A New Home or a Temporary Refuge
pdf - 2 MB