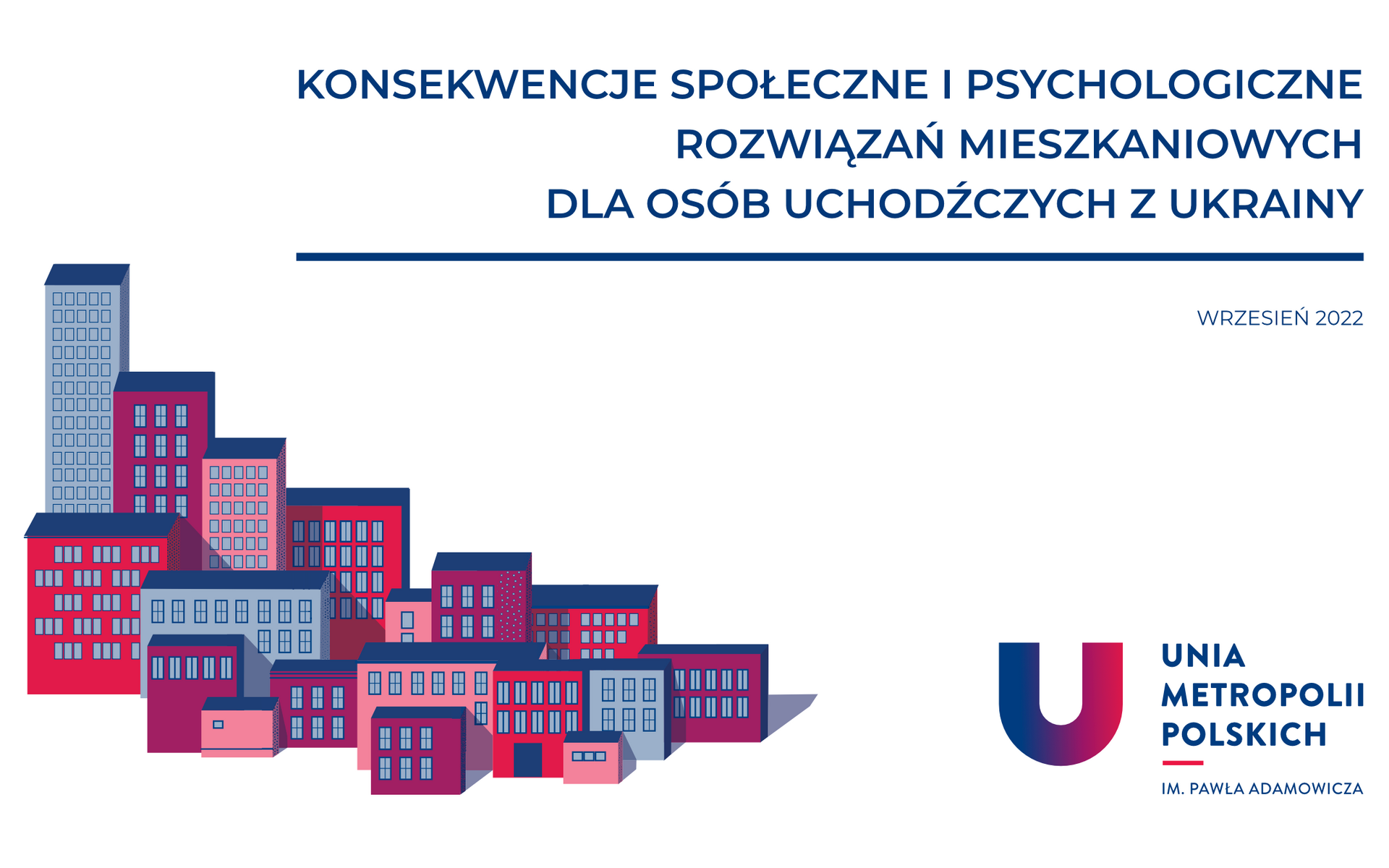 Ukrainians in Poland: UMP on housing solutions for local authorities

A wave of refugees from Ukraine with the arrival of colder winter days seems certain. Are local governments ready for this and how will the government support them in this? The questions are still open, as the draft amendments to the Law on Assistance to Ukrainian Citizens in Connection with the Armed Conflict on the Territory of Ukraine are still under discussion. Have the cities learned anything from this situation? The Paweł Adamowicz Union of Polish Metropolises attempts to answer this question in its report "Social and psychological consequences of housing solutions for refugees from Ukraine", which, in addition to conclusions, includes recommendations and potential risks related to the housing situation of refugees from Ukraine.

The report is intended primarily for local government officials who, at the outbreak of the armed conflict in Ukraine, were faced with the task of preparing a strategy of action in several time perspectives and with the task of selecting a package of housing solutions optimal for the given spatial and social context. The publication describes the situation, solutions and consequences of the refugee crisis from the perspective of the large cities belonging to the Union of Polish Metropolises.

According to a UMP report published in April, which analysed the number of Ukrainians arriving in Poland after 24 February this year.  "the overwhelming majority of Ukrainians decided to stay for a longer period of time in Poland's largest urban centres, mainly in the metropolitan areas belonging to the UMP. In March 2022, our cities and their surrounding municipalities hosted almost 70% of all Ukrainian citizens who arrived in Poland after 24 February and who lived here before - more than 2 million 200 thousand people". Hence the need to analyse the situation and create recommendations and risk markers for future similar events. These can be used by local authorities to deal with the next wave of refugees from Ukraine, but also from Belarus, who are already crossing the Polish borders. Of course, assistance should also be sanctioned by the government side.

The report briefly recalls and summarises the currently dominant forms of residence for refugees in large cities, in order to consider which of them and how they might function in the near future. Descriptions of further forms of residence point out their advantages and associated risks, and describe how, from the perspective of local governments, to prevent negative social phenomena where possible and how to prepare for what cannot be prevented.

The reflections presented in the document are based primarily on the results of workshop meetings with representatives of cities directly confronted with the problems of refugee accommodation and on interviews with specialists in migration, refugees and social processes.

The report draws some important conclusions, including the following.

"Social and psychological consequences of housing solutions for refugees from Ukraine" is another in a series of studies examining and characterising the situation of Ukrainians in the cities of the Union of Polish Metropolises after the escalation of the war in Ukraine. The report 'Urban hospitality: great growth, challenges and opportunities', which was published at the end of April this year, is the first in Poland to provide estimates of the number of Ukrainians and Ukrainian women who reside in the 12 largest Polish cities and their metropolitan areas, and to show where they are staying. According to this report, the number of Ukrainians in Poland was almost 3.2 million in March. According to an update of the document in July this year, it rose to 3.85 million in April and fell slightly to nearly 3.4 million in May. According to another UMP 'Neighbourhood Assistance' report from August this year. , it appears that by the beginning of May 2022.  67 per cent of the residents of cities affiliated to the Union of Polish Metropolises were involved in helping refugees from Ukraine. On the other hand, the report "A NEW HOUSE OR A TEMPORARY ASYLUM?" estimated that more than half of Ukrainians applying for a PESEL number at the end of April this year wanted to return to their country after the war, and one in five did not know if or when they would return.

THE REPORT AND THE APPENDIX (THE WORK) ARE SUBJECT TO THIS CREATIVE COMMONS PUBLIC LICENCE - ATTRIBUTION 3.0 POLSKA (CC BY 3.0 PL). THE WORK IS PROTECTED BY COPYRIGHT OR OTHER APPLICABLE LAW. USE OF THE WORK IN ANY MANNER OTHER THAN AS PERMITTED BY THIS LICENSE OR THE LAW IS PROHIBITED.  EXERCISE OF ANY RIGHT TO THE WORK IDENTIFIED IN THIS LICENSE INDICATES YOUR ACCEPTANCE OF AND AGREEMENT TO BE BOUND BY THE TERMS OF THIS LICENSE.