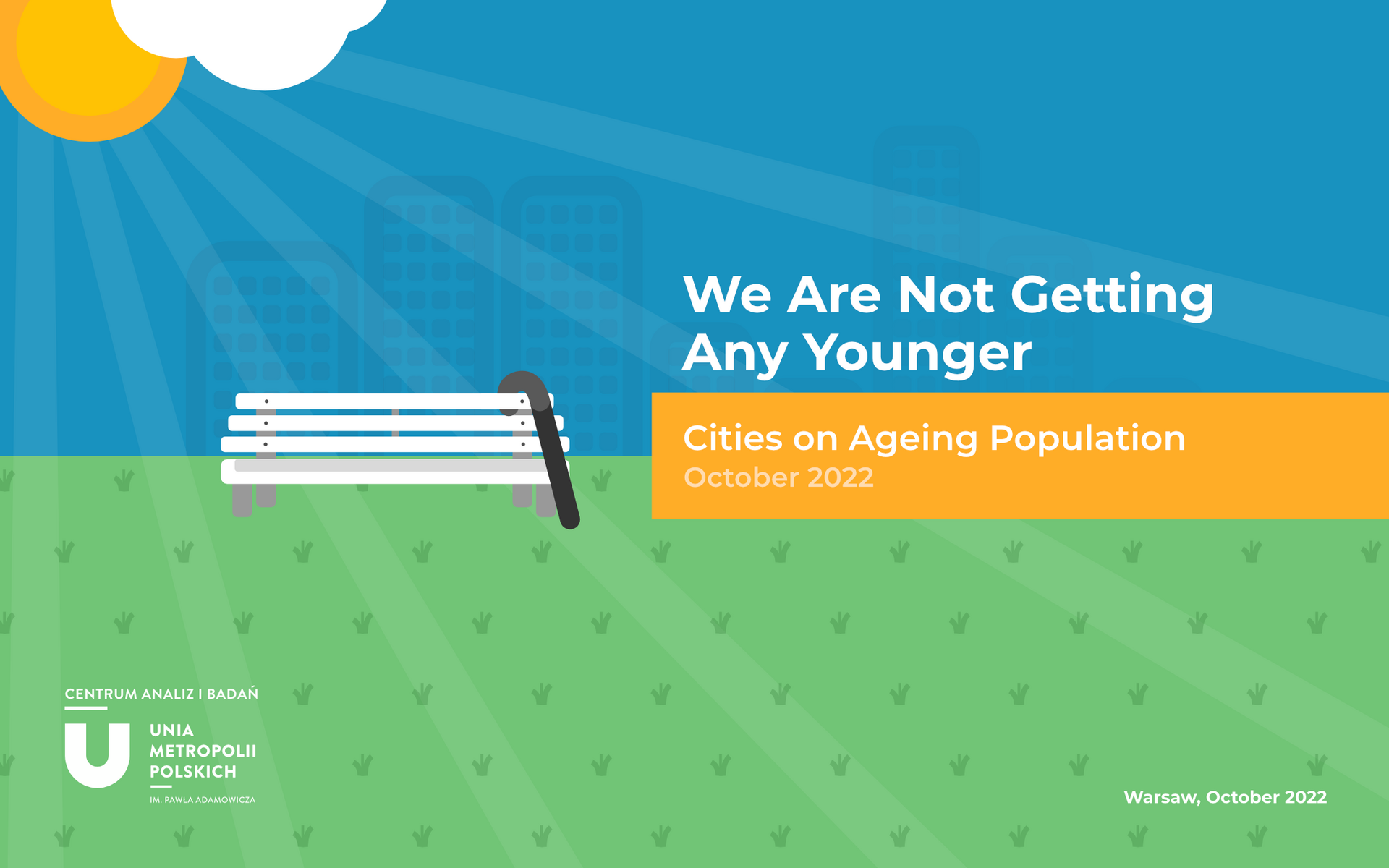 UMP report: We Are Not Getting Any Younger

We are living longer and longer, and at the same time fewer and fewer children are being born, so in effect we have an ageing population. This process will be accompanied by a decline in the population of cities, including the largest ones - the voivodeship ones. Local authorities are aware of the need to adapt cities to these demographic phenomena. The question remains: how can we create age-friendly cities?

How the member cities of the Paweł Adamowicz Union of Polish Metropolises are preparing themselves for the imminent demographic changes, what policies they are pursuing in this direction and what measures they are taking was the subject of a study whose results were presented in a report prepared for the UMP by Dr Joanna Felczak, Dr Paweł Kubicki, Professor at the Warsaw School of Economics, Dr Ewelina Szczech-Pietkiewicz, Professor at the Warsaw School of Economics, and Dr Zofia Szwedy-Lewandowska.

- Ageing is a process that, in terms of public policies, requires action in many areas and at various levels. - explains Magdalena Wojno, coordinator of the UMP Social Affairs Committee - It is also important to remember that seniors are a diverse group. Local policies and programmes, not only those dedicated to seniors, must build cities that are also inclusive of seniors.

This publication describes the socio-demographic determinants of urban policies, the challenges of an ageing population, as well as recommendations for actions and solutions, the implementation of which will create a city friendly to people of all ages. The report also contains brief characteristics of all twelve member cities of the Union of Polish Metropolises: Białystok, Bydgoszcz, Gdańsk, Katowice, Kraków, Lublin, Łódź, Poznań, Rzeszów, Szczecin, Warsaw and Wrocław.

Currently, around one fifth of Poland's population is aged 65 and over). While until 2007 the proportion of older people was higher among residents of rural areas, after 2007 the proportion of older people among urban residents has been growing dynamically. In the coming decades, the progressing process of ageing of the population will be accompanied by a decrease in their number in most cities, although this process will be spatially differentiated. According to forecasts of the Central Statistical Office, only Warsaw and Rzeszów will not record a decrease in the number of inhabitants. The remaining voivodship cities will observe a decline in population, with the population of Poznań and Łódź falling below 0.5 million in 2048. The shrinking population is accompanied by a change in the age structure of the population as a result of the acceleration of not only the ageing process, but also the double ageing of the population (an increase in the share of the oldest people in the senior population).

The authors of the report also highlight other challenges and problems associated with the process of urban population ageing. Among others, the increase in the number of single-person households inhabited exclusively by elderly people (who often require care). But they also point to the benefits that can come from the potential of the so-called silver economy, e.g. through the development of innovations (including technological ones), adapting services, products and business models to the needs of older people. As well as an increase in the level of social capital through the aforementioned greater activity of seniors and their involvement in the life of local communities.

Cities in the UMP can be considered experienced when it comes to planning and implementing policies in the area of ageing. Some of them are members of the World Network of Age-Friendly Cities or are preparing to obtain this title. In each of the cities, the topic of urban ageing and policies for older people has been seen as one of the priority themes and at the same time growing in importance in recent years. This manifests itself, among other things, in the fact that the issues of older people are an integral part of practically all municipal policy documents, which are also consulted with senior citizens' councils and municipal units dealing with older people's issues.

In the survey conducted, cities also defined those areas where they see the most problems related to the functioning of older people. These include, first and foremost, the adaptation of existing urban infrastructure to the needs of senior citizens; the creation of an adequate elderly care system. A major challenge in all cities is the issue of the flats in which seniors live, their inadequacy (lack of lifts, thresholds, etc.) to meet the changing - due to physical fitness - needs of these people, but also the often large size of the flats and the cost of maintaining them. Representatives of UMP cities also drew attention to legal and administrative barriers that (e.g. in the field of social assistance) make it difficult for cities to create an offer for older people. Flexibility in the law and greater freedom in local government decision-making would make it easier to create an offer for the community.

The Report also includes recommendations on the directions that should be taken in the long term and in the creation of models for the development of the city to take into account the needs of older people in the future. In the opinion of the authors of the Report, the framework for such development is provided primarily by the 15-minute city formula. This model, which boils down to close accessibility to the city's various functions, is probably best suited to the requirements and needs of senior citizens. This is also due to the preferred form of movement in urban space for this social group. Seniors prefer walking, which for them is not only a form of mobility, but also a form of physical activity. Therefore, the so-called walkability of cities should be one of the priorities of development strategies.

Of course, these strategies should also include health, housing, mobility, land-use and education policies. However, it is worth emphasising that by creating a senior-friendly city, we are creating a place that is friendly to people of all ages. 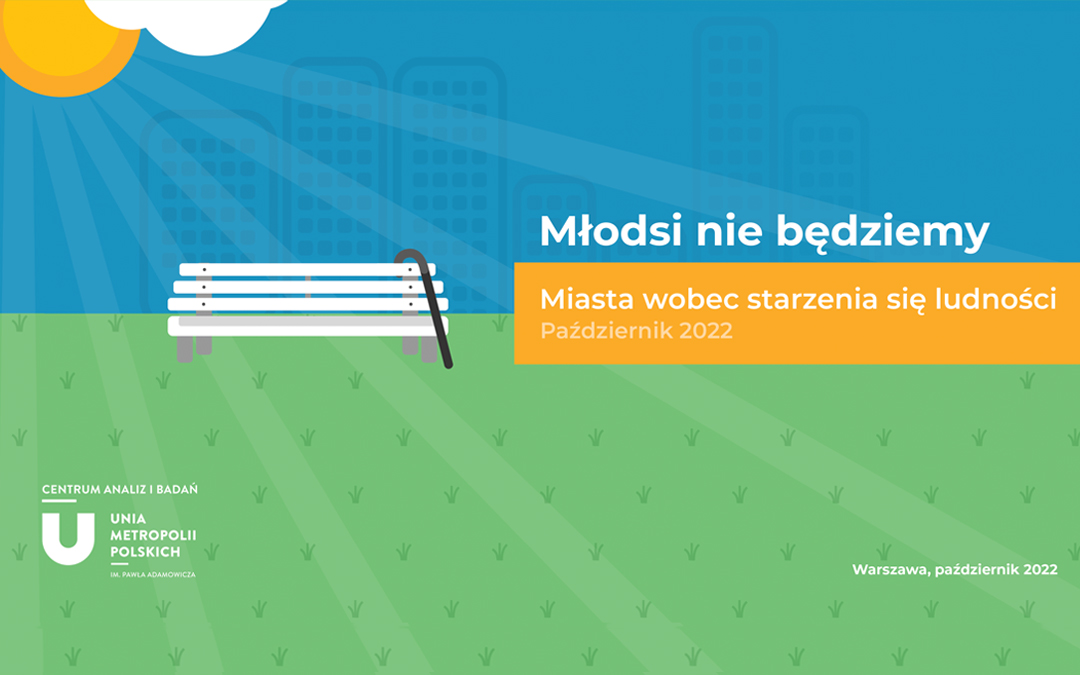